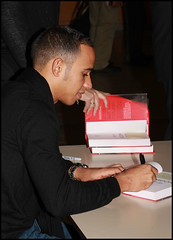 Hamilton is obviously still a very young man – he was only born in 1985 – so we can expect further volumes in the the future!

Rules have been strict at his recent book signing events with an insistence on all copies being specifically dedicated.

Photographer Steve Chilton says: At this stage the queue of people waiting to see him covers most of the floor space on the first-floor of The Howard centre. He is using the first of several pens required to complete the task.